Does any first time Mom ever set out to breastfeed beyond a year or two?  I suspect not.  Most expectant Mothers say they’d like to try breastfeed, but are unsure whether their body or their baby will comply.  There are so many unknowns in pregnancy, aren’t there?

Exclusive breastfeeding, extended breastfeeding – we hear these terms bandied about during our pregnancies, but we don’t quite grasp their meaning. So for the purposes of this article, let’s define these two right up-front:

I was one of those Mothers who planned to breastfeed exclusively for 6 months, and then taper off as I introduced my baby to solids. Back then I thought this was a 3 or 4 week process of getting them used to the different food groups.  How wrong could I be?  Although I followed all the steps of baby led weaning, my son didn’t show much interest in food at all until he was over 10 months, and even then ate very little.  It was at least another year before he was really eating full meals.

Before I had my son I learnt that the World Health Organisation recommends breastfeeding to two years and beyond. That sounded like something nice to shoot for, but a long shot at the same time.  Yet here I am, 2 years and 7 months into motherhood, and still nursing my son.

Yes, I am one of those weird Moms, nursing a toddler.

It wasn’t exactly the plan going in, but as I came to know and appreciate the pure joy and beauty of nursing, it became the plan.  That’s not to say it’s been easy and enjoyable all the time, that would be a lie…

So here’s some straight talk on some pros and cons of extended breastfeeding.

Pro: Nursing is both the Comfort and Cure for most Childhood Illnesses and Accidents

It’s well documented that breast milk is one of nature’s most powerful immune boosters.  Breastfed children get sick less often and illnesses are less severe.

I’ve found this to be true.  To date, (touch wood), my son has never been hospitalised for any childhood illnesses.  He had one major bout of ‘flu just before he turned one, and 2 or 3 minor colds since. He’s had diarrhoea twice.  Each time he was sick, all he wanted to do was nurse. He refused most medication, except the occasional spoon of baby Panado and homeopathic medication (Oscillococcinum and Stodal Syrup).

Breast milk is what got him through, because it’s teaming with all the nutrients and antibodies needed to fight diseases.  It’s not only what made him get better, it’s what made him feel better.

The same goes for accidents that happen most days to active young toddlers.  Breast milk is known to have anti inflammatory and analgesic (pain killing) properties.  Moreover, it has a calming effect on both mom and child. For the first 2 years of his life, nursing was my son’s primary comfort for those little scrapes, grazes and burns.  Now that he is a bit older, and used to being at school some mornings, he’ll sometimes ask for water or a sweet treat to comfort himself after a fall. (The weaning process has started).

Con: Nursing can be boring

Especially in the early days, when babies like to nurse for 45 minutes at a time, and then for another 45 minutes an hour or so later, nursing can seem tedious and boring.  That’s why it’s a surprise when this continues long after a baby starts solids, and into early toddler-hood.  Between the age of one and two, many toddlers continue to enjoy suckling for long periods of time.  My son certainly did, and so I had to find a way to relax and enjoy this time.

Suggestions to alleviate the boredom:

Take this time to read, meditate, pray, listen to music, watch TV (if it doesn’t disturb your little one).  I used to whatsapp my Mommy friends and do online research on my smartphone while nursing, until my kinesiologist suggested that the electro-magnetic waves may not be safe for baby.  Now, if I use my cellphone while feeding my son, I’ll make sure it’s on flight mode.

What’s also boring is the limited clothes you can wear.  Nursing-friendly garments are also not the most glamorous.  If you are lucky enough to lose that pregnancy weight, quickly,  (a common happy spin-off of nursing), you probably can’t wait to get into a little black dress. I don’t recommend it though.  There’s no chance of sneaking a feed in public, or even in a public bathroom, if you have to take a dress off to nurse.  Trust me, I learn’t the hard way. 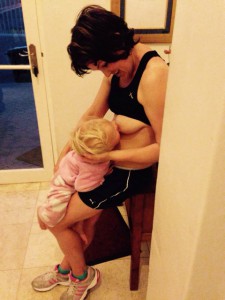 Scientific studies have proven that breastfeeding boosts brain development.  My son sat, crawled, walked and talked a lot earlier than most children his age.  Having him able to communicate his wants and needs has been the greatest benefit to us as parents, as it’s meant far fewer tantrums.  Breastfeeding takes care of two of the biggest causes of toddler tantrums: toddlers are either shouting for attention or frustrated because they can’t express themselves.  Add to this the calming effects of nursing, and we’ve hardly experienced the so called “terrible two’s”.

Con:  Children may want to nurse at inconvenient times

Sometimes you have to put aside your own bodily needs to nurse.  This sounds like such a lame negative to discuss, but believe me – when you’re parched, weak from hunger, or when nature calls (loudly), it’s no fun to nurse.  It becomes a huge lesson in patience and unconditional love.

Research shows that Mom’s who nurse are less likely to fall prey to breast, uterine and endometrial cancer. They also have a reduced risk of osteoporosis and type 2 Diabetes.  Interestingly, the longer you nurse your children, the lower your risk.  Long live nursing! Long live Moms who nurse!

Con: Nursing can be uncomfortable or even painful for Moms

Back pain can be a big issue for nursing Moms.  It’s not easy or comfortable lying in exactly the same position for long stretches of time, and toddlers can get heavy.

Also, your toddler may be too tired to latch properly, every now and then, and you could land up being bitten.  Ouch! I remember the first time my son nipped me on a feed.  I got such a fright, I yelped and pulled away, and he burst into tears.  After that he was too scared to feed for the rest of the day, and I feared a nursing strike.  Fortunately, he resumed feeding during the night when he was too sleepy to remember the incident.  However, that was the beginning of a few painful days of latching, re-latching and teaching him to open wide, until we got the teeth out of the way.  As with all phases of motherhood, it didn’t last forever.

Pro: The longer you nurse, the better it feels

At some point, usually between 6 weeks and 6 months, a mother settles in to the absolute wonder of breastfeeding. This is the time when the Mom starts experiencing moments of pure love, joy and peace that are hard to describe to anyone who has never had the privilege of nursing.  This is when nursing starts feeling like meditation.

Somewhere between 9 months and 18 months, the little one may start playing with Mom’s hair, or tickling her face, or stroking her shoulder during feeds, and the bonding deepens further.

Sometime between 18 months and 2 years, a toddler might start bringing their favourite toys to their feeds, often one toy for you and one for them. Mom gets to share play time with her developing child while nourishing them. Cute conversations and giggles happen on feeds.

Your little one may stop nursing for a moment to gaze into your eyes and say, “Mom, I love you so much” or “Mommy, you’re my best friend.” These are precious moments a Mom wouldn’t give up for the world.

Con: The longer you nurse, the more criticism you encounter

As your child gets older, you’ll notice more and more of your friends and family, even strangers, making your nursing journey their business.  People start questioning when you’re planning to stop. Some people make rude comments or shoot you looks of disgust.  Fortunately, by this time most Moms are so hooked on breastfeeding that it doesn’t bother them.  My standard reply: I’d like to continue until my son weans naturally, as it’s another developmental milestone for him.

Pro: You are irreplaceable – no substitute will do

Nothing beats the feeling of being the one person who can make your child happy (most of the time).  For the first 5 years, mothers are usually the most significant person in their child’s life, and it feels good!  You feel wanted and needed and loved like never before.  You’ve never felt so important to anyone, ever.

Knowing that your breast milk is the best thing you can provide for your precious bundle of joy, both physically and emotionally, short term and long term, is wonderfully validating.  And feeling that special brand of love and gratitude from your child, in the form of relaxation in their little bodies when they nurse, is like a little slice of heaven.

Con: You are irreplaceable – no substitute will do

There’s no doubt about it, dinner, dancing, even your marriage, takes a back seat when you’re nursing.  Your social life is on the back burner.  Night life has been traded for night feeds.

But there’s good news, these are all temporary losses for long-term gains.  Recent research has shown that the relationship set up while nursing can have emotional benefits for years to come, helping children, teens, even adults feel more secure and confident in themselves.

When nursing starts feeling too hard, and it feels like the cons outweigh the pro’s, consider that it may be time to wean.  Or, just take it one precious feed at a time, and keep breathing every mother’s favourite mantra: This too shall pass.

For me the benefits far outweigh the drawbacks.  What do you think?  Would you consider nursing a toddler?

19 Replies to “Would you consider nursing a toddler?”